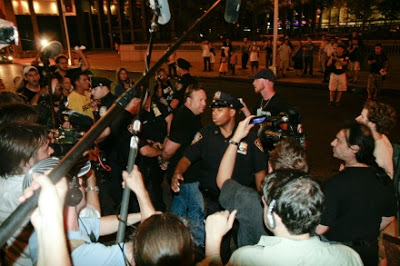 from paul joseph watson: Media activist Alex Jones was arrested by New York Police Department officers while filming a documentary about the sixth anniversary of September 11th and joining the protest against the official version of what happened on 9/11.

According to Infowars sources Jones was singled out by police from the head of a crowd of about 400 9/11 Truth Activists and protesters. He was verbally accosted and forced by the police officers to present identification which he was not carrying at the time.

NYPD officers arrested Jones for "unspecified charges" and removed him from the protest crowd to be taken to the nearest police precinct where he was later released following a protest outside the jail by other 9/11 truthers who chanted "let him go".

Jones was arrested during a protest of the live Geraldo broadcast on Fox News.

Geraldo ridiculed protesters and lauded the arrests as live footage of Alex being frog marched away by officers was broadcast, refering to them as "anarchists," "communists" and "one of the least attractive groups of protesters I've ever seen".

In another clip, Geraldo states, "I think these demonstrators are all into rest room gay sex". He later physically threatens the protesters, saying that if violence broke out "our Fox News team can take this bunch."

The demonstrators had tried to obtain a "permit" for the protest but were refused by authorities. Officers later ticketed Jones for "using a sound device without a permit".

However, other people who were simply filming the arrest were also arrested themselves.

Alex said the arresting officer was overbearing and that having the cuffs slapped on him hurt more than when he cut his finger off in a boating accident.

The officer physically charged and assaulted individuals who were not even involved in the protest, such as Discovery Channel cameramen.

Alex Jones' cameraman Rob Jacobson was also pushed by cops and then punched in the shoulder for "obstructing police business" despite the fact that he was stood well away from the area on the sidewalk.

Two British cameramen who were part of the We Are Change UK group were also arrested for "blocking traffic".

Eyewitnesses described a chaotic scene where police simply waded in, assaulting and arresting people on a whim, but noted that Alex Jones was singled out immediately after cops arrived.

Geraldo Rivera and Fox News chiefs were responsible for calling the police and having protesters arrested.

The group were told that they didn't have a permit to protest. A permit is government permission to do something that would otherwise be illegal - meaning the right to peaceably assemble and free speech as defined in the Constitution have been officially outlawed.

"Word came in that Geraldo Rivera was giving a live broadcast only a few blocks away," writes We Are Change. A truth squad quickly dispached itself to the scene. There, the group chanted a deafening "9/11 Was An Inside Job" endlessly. The police were concerned with us blocking the sidewalk, but so long there was a clear path we remained about 20 feet from Geraldo. All of the signs and banners were visible on TV, and it just happened to be up on the jumbo screen in the middle of Times Square. Then the rest of the group saw Alex Jones was suddenly pulled aside and arrested by police.

Groups headed out and searched for the precinct Alex was taken to. After finding the location, the rest of the group met there and demanded Alex's release. Within only a few hours, we got what we wanted!