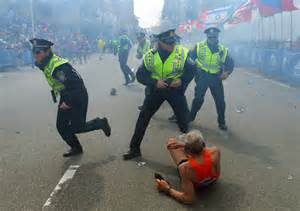 All Terror Attacks Are Psyops

Jon Rappoport writes, "All Terror Attacks Are Psyops," describing psychology of terror attacks!  A Cliff Notes version of agenda behind bombing, Monday, at the Boston Marathon, supplied for readers.  It's a nice encapsulation for those who don't want to think too hard.  It's all there even insane celebration of  dates with death, elite are known to use:

"All terror attacks, no matter who launches them, have a psychology. They have a pur- pose. Inducing fear, of course. Causing the public to give in to a new set of “security regulations,” which tighten the screws on freedom, of course. Painting some designated group as heinous, of course.

The third Monday in April, is Patriot’s Day. It commemorates the April 19, 1775, opening battles in the Revolutionary War against England, at Lexington and Concord. Previously celebrated on April 19th, it is also the anniversary of the Oklahoma City Bombing (1995), and the final FBI attack on the Waco, Texas, Branch Davidian compound that killed 76 men, women, and children (1993). April 15 is also tax day.

So some media commen- tators are already opining that 'anti-tax-pro-patriot-anti-government' persons are behind the Boston murders."

Will mainstream media finger patriots with guns and tax protestors?