from propaganda matrix: The alleged ringleader of a much vaunted plot to blow up multiple transatlantic airliners using liquid explosives has been cleared of terrorism charges and of being a member of any terrorist group, rendering August's terror scare another hyped creation of government scare mongering.

In every single major terror bust or terror alert we have proven the evidence to be flawed and the charges to be cooked up nonsense aimed at prolonging the illusion that terror cells are lurking around every corner waiting to cause mayhem. The geopolitical agenda of the U.S., Britain and Israel depends on the proliferation phony terror threats in order to continue the farcical war on terror and take more of our innate freedoms at home to stifle dissent against the plot for worldwide hegemony.

The supposed transatlantic bomb plot has dissipated into another staged terror alert. 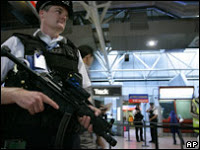 "A Pakistani judge has ruled there is not enough evidence to try a key suspect in an alleged airline bomb plot on terrorism charges. He has moved the case of Rashid Rauf, a Briton, from an anti-terrorism court to a regular court, where he faces lesser charges such as forgery."

"The Pakistani authorities described him as a key figure."

"But an anti-terrorism court in Rawalpindi found no evidence that he had been involved in terrorist activities or that he belonged to a terrorist organisation."

Since the panic surrounding the ridiculous hoax that led to an outright ban on all liquids in U.S. and British airports, the credibility of the alleged plot itself has crumbled.

In a series of reports following the August 10th scare, we traced the source of the alleged attack plot to Pakistani and British intelligence and were rapidly able to confirm that the story was nothing more than a manufactured ploy to frighten travelers at the height of the holiday season.

It comes as no surprise that the Pakistanis have acquitted Rashid Rauf. His involvement with the Lashkar-e-Toiba group provides a direct lineage back to the Pakistani ISI, which is in turn controlled by the CIA and British intelligence. Rauf likely acted as the willing patsy for the plot to be pinned on while the Blair government waved it in front of Britons as another reason for them to accept the Blairstrip One fascist surveillance state without dissent.

It was revealed that the alleged terrorist cell that planned to blow up ten planes had been completely infiltrated for weeks before the announcement of the foiled plot by British intelligence. From the evidence at hand allied with past history of how MI5 work, which was presented in our article, it can be reasonably claimed that an MI5 mole within the group orchestrated the entire operation.

According to news reports the British government and MI5 wanted to wait at least a week before busting the liquid terror cell that their agents had fully infiltrated, including planting a mole within the bomb squad. From the acknowledged timeline and admission that the real attack was scheduled for August 16th - little else can be deduced but the shocking fact that MI5 wanted the bombings to go forward - arresting the perpetrators only after the attack.

Echoing the activities of the 7/7 bombers, some of the main suspects in the case aside from Rashid Rauf exhibited behavior that in no way suggested they were preparing to launch mid-air suicide attacks on jumbo jets. Far from preparing his last will and testament, psyching himself up for his imminent death or acquiring the necessary materials to conduct the operation, Tayib Rauf was caught on CCTV hours before the launch of the plot doing something far more mundane - he was buying cakes for his father's confectionary business.

Former British Ambassador to Uzbekistan Craig Murray slammed the so-called foiled plot story as "propaganda" on behalf of Bush and Blair who yearn for a "new 9/11" to reinvigorate their flagging support base.

"None of the alleged terrorists had made a bomb. None had bought a plane ticket. Many did not even have passports, which given the efficiency of the UK Passport Agency would mean they couldn't be a plane bomber for quite some time," said Murray.

Unconfirmed sources suggest that insider speculators with informants inside the British intelligence apparatus took advantage of their foreknowledge of the announcement of the foiled terror plot to place put options on airline stocks, reaping the benefits of their subsequent fall. Airline stocks dropped as much as 28 per cent during morning trading following the announcement of the alleged liquid bomb plot.