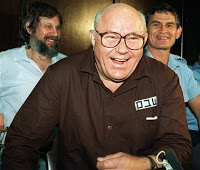 (hmm, there sure are alot of nazi stories in the news lately.
i should paperclip them all together & save them for an overcast day...)

from ap: A lawyer for a former autoworker accused of being a Nazi death camp guard on Thursday challenged the right of the nation's chief immigration judge to order his deportation.

The 6th U.S. Circuit Court of Appeals heard arguments on the accused guard John Demjanjuk's challenge to a final removal, or deportation, order issued in 2005. The federal government has been trying to deport him for three decades...

The arguments revolved around whether an immigration judge had the authority to order the removal of Demjanjuk, 87.