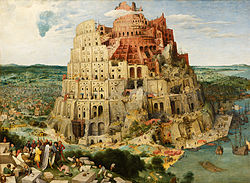 American Babel of the 21st Century

Bible prophecy seems far-fetched, but does it simply describe realities beyond our experience?  Will Nimrod return through a Stargate?  Paul McGuire senses urgency in article, "RETURN OF NIMROD, AMERICAN MATRIX AND THE BABYLONIAN STARGATE," clearly sees an American Babel.  "What happened at the Tower of Babel is now happening in America and the world. The Tower of Babel was the world’s first one world government, one world economic system and one world religion. In Revelation Chapters 17 and 18 we clearly see the rise of both economic Babylon and spiritual Babylon,"  is offered, by McGuire as modern parallel to an ancient past.  A New Babylon has been a goal for a long time as McGuire reminds:
"Going back to the mid-1600s Sir Francis Bacon planned for America to be
the New Atlantis and the center of the New World Order. The occult
spiritual technology used by Nimrod at the Tower of Babel was first
developed in Atlantis."

McGuire informs reader of full import of what Babylon means below:

"The word Babylon is derived from the Akkadian 'babilani,' which means 'the gate of gods' and it became the capital of the land of Babylonia. The Tower of Babel that was built as a technological and occult worship tower was a Stargate. It was built to allow the gods to come down to the Earth. These gods were interdimensional beings. The interdimensional hypothesis (IDH) is a theory by scientist Jacques Vallée that says unidentified flying objects (UFOs) and related events involve visitations from other 'realities' or 'dimensions' that coexist separately alongside our own."

"The interdimensional beings that were at the Tower of Babylon are now in America and other nations of the world," contends McGuire.  A change agent much closer in history, Julian Huxley set in place worldwide foundations, moving us toward an American Babel.  "The creation of this new Babylon was spearheaded by Sir Julian Huxley, the first director-head of UNESCO. Nimrod would return again through the Babylonian Stargate and enter the American Matrix in order to rebuild Babylon. Huxley, like Nimrod, would build a single world culture with a common cultural language just like at the Tower of Babel," writes McGuire.

There's the temptation to dismiss Nimrod's return through a Stargate as science fiction. The present writer suspects, as human beings with an earthbound experience, there's more to learn!  We'll wait and see if there's more to our reality than confronts us at present?