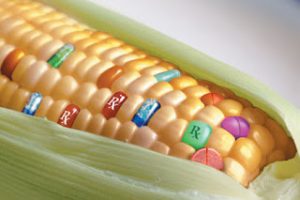 from naturalsociety.com: We know that the vast majority of corn, soybeans, and much of many other crops are genetically modified, but do we know how the how much GMOs are consumed each year? Actually, yes. Average Americans today eat about 193 pounds of genetically modified foods over 12 months—and that’s an underestimate, according to the Environmental Working Group.

EWG analyzed data from 2011 provided by the US Department of Agriculture to investigate how much GMOs Americans were eating annually. Four foods—sugar beets, corn syrup, soybean oil, and corn-based products—were selected for calculation, with 95 percent of sugar beets, 93 percent of soybeans, and 88 percent of corn grown in the US being some of the top genetically modified foods.

Research by EWG also indicates that children—who are increasingly experiencing obesity—are at greater risk of consuming more GMOs because of their superior sugar intake. It’s a small wonder if you know that children, who spend an average of seven hours in front of a screen daily, are exposed to more than 15,000 ads each year involving candies and snacks. Hispanic Americans, too, are at risk because they eat between two and three times more corn flour than do those of other ethnicities.