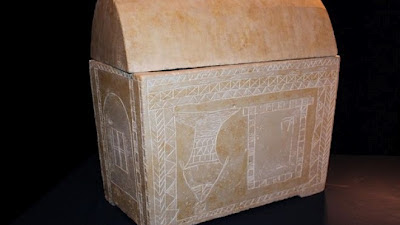 from foxnews.com: Long-unrecognized lettering confirms that first-century artifacts found within an ancient Jerusalem tomb are the earliest representations of Christianity ever found, researchers say. Two Hebrew scholars who examined photographs showing the inside of the tomb agree that markings on an ossuary – a box made to hold human remains — are stylized letters that spell out the name of Jonah, the researchers said Thursday (April 19). Jonah was the Old Testament prophet whose story of being swallowed by a great fish was embraced by the early followers of Jesus. The tomb, located 6.5 feet (2 meters) below an apartment building in the East Talpiot neighborhood of Jerusalem, was discovered in 1981 but resealed after Orthodox Jewish groups opposed its excavation. Two decades later, the group got license to enter the tomb, which has been dated to before A.D. 70. Researchers led by James Tabor of the University of North Carolina at Charlotte did not enter the tomb themselves but instead used a remote camera to explore it. Their analysis of the images was reported Feb. 28 in the journal The Bible and Interpretation. The Hebrew scholars’ translation of the stylized letters on the ossuary have yet to be published.