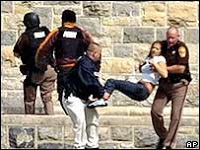 anger over US shooting warnings

from blacklisted news/bbc: Survivors of the worst shooting rampage in US history have accused authorities of not acting quickly enough to alert people a gunman was on the loose.

There were two attacks two hours apart, with 30 people shot dead in the second.

Students have said they were not properly warned after the first shooting, but officials said they acted on what they knew at the time.

President George W Bush said the US was "shocked and saddened" by the attack at the university, home to 26,000 students, in the town of Blacksburg.

Many unanswered questions remain about the attacks.

Police have still not said for sure that the two attacks were linked. They have confirmed that two handguns were recovered.

They say they have a preliminary ID of the dead gunman but have not released it. There is no clue yet as to any motive.

Virginia Tech police chief Wendell Flinchum also refused to rule out the possibility of a co-conspirator.