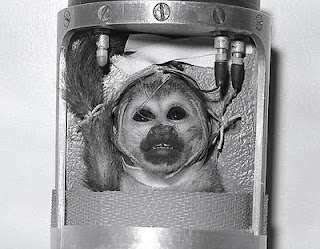 from the register: Animal rights groups are apparently not pleased with NASA's plan to zap squirrel monkeys with repeated doses of radiation for science. The US space agency will expose between 18 to 28 of the moneys to low doses of radiation daily to better understand the effects of long-term exposure outside Earth's protective magnetic shield. American anti-animal testing group, the Physicians Committee for Responsible Medicine, has launched a protest asking concerned citizens to tell NASA Administrator Charles Bolden to put a stop the experiment. "Radiation experiments involving nonhuman primates commonly involve restraint and other cruel procedures," the organization claims. "Monkeys, like other primates, are highly intelligent, have strong family bonds, demonstrate empathy, and, most importantly, suffer."