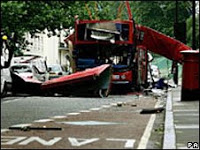 from bbc: Hundreds of people crowded into King’s Cross station to remember the 52 people killed in the 7/7 suicide bombings in London three years ago. Minister for London Tessa Jowell and London Mayor Boris Johnson laid flowers there at 0850 BST, the time the first three bombs exploded.

how 7/7 changed britain
from khaleej times: On the eve of the third anniversary of the 7/7 bombings, Channel 4’s Dispatches returns to one of its favourite subjects – Muslims. The programme, called It Shouldn’t Happen to a Muslim, looks at how life has changed for Muslim families in the UK since 9/11. It recounts vicious stories of horrific, racist brutality against Muslims, not the extremist ones, but the ordinary, law-abiding ones; stories that are rarely reported in the Press.