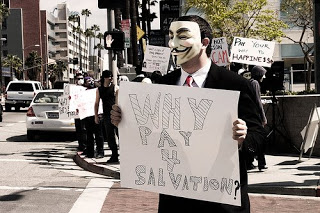 from threat level: An 18-year-old New Jersey man agreed to plead guilty to federal computer hacking charges Friday for participating in a denial-of-service attack against Church of Scientology websites, as part of collective of online troublemakers known as "Anonymous." Dmitriy Guzner is charged with a single felony count of unauthorized impairment of a protected computer for the January distributed denial-of-service attack. He faces a likely sentence of 12 to 18 months in prison based on stipulations in his plea agreement, which also obliges him to pay $37,500 in restitution. Anonymous is best described as a collection of griefers who hang out in the net's most juvenile corners looking for some outlet for their boredom. Past targets include uncool virtual worlds, an epilepsy message board and a Neo-Nazi webcaster.