another elaborate bomb drill in oregon

from news-register: Operation October, designed to simulate a countywide multiple explosives incident, will be launched in dramatic fashion.

At 1:30 p.m. Tuesday, a call will be received at the Yamhill Communications Agency dispatch center in McMinnville that a bomb has just gone off at the building across from the courthouse where the Yamhill County commissioners have their offices.

Local law enforcement and emergency medical personnel will respond, along with the Oregon State Police Bomb Squad, which will send its robots and other equipment into the building in search of any additional explosive devices.

Streets in the immediate area will be cordoned off, occupants of nearby buildings will be notified and the Yamhill County Jail will be locked down.

Three elementary schools - Carlton Elementary, Newberg's Mabel Rush and Sheridan's Faulconer-Chapman - will each be informed of reports a bomb has been planted in the building. Those schools will be evacuated.

John Boynton, the county's emergency manager, will be positioned at the Dayton Fire Hall, where the primary emergency operations center will be located. He will monitor activities at the commissioners office and each of the schools.

"This drill will best the communication, accountability and coordination of the participating local, county, state and federal agencies and the school districts," Boynton said...

"We're fixing our plan and fixing our plan," (Faulconer-Chapman Principal Marti) Hofenbredl said. "We've sent letters home to parents. Another letter goes home Monday. My biggest fear is parents coming to school to pick up their children for some reason and finding everyone evacuated."

She said the exercise should benefit students and staff greatly. She said exercises like this instill confidence in everyone, particularly the students...

In addition to the commissioners, their office staffers and the schools, the roster of participants will include police and medical first responders from Carlton, Yamhill, McMinnville, Newberg and Sheridan, the public works departments from those cities, the Oregon State Police, American Red Cross and FCI Sheridan inmates and staff.

Citizens are asked not to call 911 to inquire about or report on elements of the exercise, which will be playing out between 1:30 and 4:30 p.m., rain or shine. 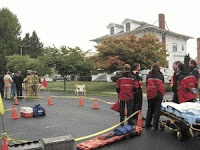 from news-register: The sound of a bomb blast echoed through the neighborhood around the Yamhill County commissioners' Evans Street offices early Tuesday afternoon, drawing a fast and furious emergency services response.

The emergency preparedness exercise Operation October was officially under way. Some passers-by took it for the real thing, particularly when the Oregon State Police bomb squad showed up, but it was just a drill.