apple files patent for a camera hidden behind the screen 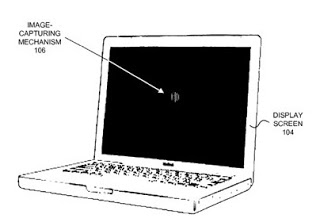 from apple insider: We’ve already seen the iSight indicator light “disappear” behind the bezel of Apple’s MacBook and iMac computers. A recently published patent application could make the iSight itself not only disappear, but move to the middle of the screen. MacBooks, iMacs, and even iPhones and iPod touches could take advantage of the new technology.

According to the document, a similar, additional system could involve two or more cameras, with software combining the two images into one. Video would also be possible by cycling the display “between the active state and the inactive state repeatedly.”

However, this doesn’t necessarily mean a ‘dark spot’ would appear on the screen during photos, or even start flashing during video capture.

“In some embodiments, the mechanism is configured to substantially minimize the period of time in the inactive state to reduce the appearance of flicker of the display screen.”

The filing explains how today’s built-in cameras require a user to look away from the lens in order to see his or her video conferencing participants.

“Constantly looking back and forth between the display screen and the camera … can be distracting and make the conversation seem awkward and unnatural.”

This would appear to improve upon a similar June 2004 filing that involved many tiny image sensors wedged between LCD cells, and software to stitch together all of the smaller pieces…

While rumors have already circulated for some time of what might best be called “iChat AV Mobile” for the iPhone, this proposed patent seems to confirm the very real possibility of such a feature for the iPhone, iPod touch, and even other devices.