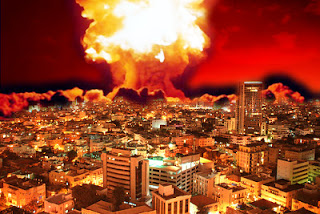 Armageddon: A Space War Coming To You Soon

Many observers expect conflict in the Middle East, as a matter of fact, an attack on Iran has been anticipated for years. Author Paul McGuire describes build up to the Battle of Armageddon, its participants and their true nature. The signs seem closer than ever although "end time" prophecy has preached its imminence for a long time as well... Are you ready as McGuire would ask? The present series, "Armageddon A Space War Coming To You Soon," McGuire exceeds expectations in his writing, as most of us are not ready, to see anything beyond our comfortable and mundane experience of life. It's a sci-fi world, offered by the writer, beyond a mere mortal's comprehension or intestinal fortitude to accept!. Yes, it's true, space platforms with nuclear weapons and genetic engineering to create super soldiers do fall within most people's ability to accept. McGuire goes much further, however, expecting a multidimensional conflict with Stargates and interdimensioanl beings that are demonic entities, e.g., Nephilim to transport mankind to a point beyond time and space called eternity! Wow! The present writer would previously not many years ago - simply dismissed out of hand - these ideas as too fantastic. Times change and incredible wickedness of world makes another look almost mandatory.

There are observations, in the series, a reader may not be familiar? McGuire believes, as many Bible researchers, there will be a brief Psalm 83 War just prior to the Battle of Armageddon. The Psalm 83 conflict describes an Arab coalition defeated by Israeli Defense Forces with God's blessing. Additional events to keep in mind are the destruction of Damascus, according to Isaiah 17:1, possibly by a nuclear device and the drying up of the Euphrates River, in Revelation 16:12-16, allowing the Kings of the East to cross it.

Who wins the final battle? The Bible informs the Russian/Iran coalition is defeated by God alone during the Tribulation at the Battle of Armageddon. McGuire makes his most important point, perhaps, when he wonders how the Bible can be ignored by our leaders, given its proven accuracy, time and again? Is it too much to ponder there are actors in the universe, who can move in time and space to get a wider view? This seems to be the point implied by McGuire:

"It is a great tragedy that so many in political, scientific and military leaders have such a myopic and uninformed bias against the Bible and its teachings. This irrational and mind control-induced bias prevents our leaders from accessing enormous amounts of information which not only predicts the future, but provides a blueprint for how things like space warfare, genetic engineering, transhumanism, macroeconomics, globalism, human performance, environmentalism, climate change and science interfaces with our society at this critical juncture in world history."

The present writer can't help suspect far superior forces are at work to script human history as revealed in Bible prophecy? It's one of just a few possibilities to make any sense of it, at least, to mankind. Again, as McGuire would ask, "are you ready?"

You may view a 2010 video version of buildup to Armageddon, "Are We Living In The Last Days."