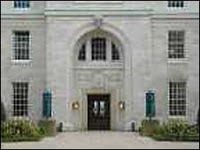 from guardian: A masters student researching terrorist tactics who was arrested and detained for six days after his university informed police about al-Qaida-related material he downloaded has spoken of the “psychological torture” he endured in custody. Despite his Nottingham University supervisors insisting the materials were directly relevant to his research, Rizwaan Sabir, 22, was held for nearly a week under the Terrorism Act, accused of downloading the materials for illegal use. The student had obtained a copy of the al-Qaida training manual from a US government website for his research into terrorist tactics.

from afp: The last outsiders to visit the ruins of the once-mighty city of Babylon in Iraq came in tanks and helicopters, leaving a blight on its historic and fragile landscape, archaeologists say. The city, born on the banks of the Euphrates River 5,000 years ago and full of priceless archaeological treasures, was transformed into a U.S. military camp after the 2003 invasion with a heliport built among the ruins… Iraqi archaeologist Hadi Mussa Qataa, who guided an AFP reporter through the fragile ruins, said helicopter take-offs and landings, along with the tremors from the heavy rumble of armored vehicles had damaged the city’s historic monuments.