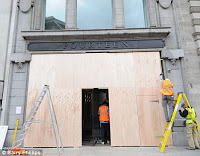 from daily mail: Five people suspected of terrorist offences are being questioned by police today in connection with an alleged plot to target the G20 summit. Three men and two women have been arrested under the Terrorism Act in Plymouth over the last three days after officers uncovered a cache of weapons and suspected extremist material during a house search. They are being questioned over claims they planned to target the meeting of the world’s most powerful political leaders in London later this week. The five were held after officers found weapons, imitation weapons, suspicious devices and ‘material relating to political ideology‘ during a house search, a police spokesman said.

5 held over suspected plot to disrupt g20 summit with explosives
from cryptogon: How will you know the difference between false flag operations and war? False flag operations are symbolic. The main goal is to create fear and obedience to state authorities through the use of propaganda in the aftermath of the event. The driving propaganda, after the fact, is the main payload, not the event itself. While it is possible that imbeciles will target individual executives for assassination or use improvised explosives to create work for janitors in corporate lobbies, these types of attacks are likely to be acts of state because of their utility for propaganda purposes. Think about it: Who benefits from attacks like these? The stoned white Rastafarian, soy people with Bozo the Clown wigs and Fair Trade hacky sacks will get the blame. It’s all “the terrorists,” right? War, on the other hand, targets critical infrastructure. Examples: Financial transaction clearing is shut down. Stock markets are shut down. Communications systems are damaged or destroyed. Energy distribution systems are damaged or destroyed. While it’s possible that attacks of this nature could be false flag, it’s not likely because unmanageable, cascading effects could result. So, as the situation continues to devolve, expect corporate states to try to short circuit street level activists with false flag operations and heavy follow on propaganda linking them with “the terrorists.”

from russia today: Some 35,000 protesters have marched in London prior to next week’s G-20 economic summit in the city. They’re demanding that world leaders protect workers’ rights, improve aid for developing countries and take more action on climate change. The Put People First march was organised by the Rainbow Alliance of more than 100 trade unions, church groups and charities. Armed with banners and flags, demonstrators marched for several hours through the heart of London. The colorful procession ended up in Hyde Park at a peaceful afternoon rally. Tony Robinson, one of the participants, addressed the crowd: “We won’t accept the old politics – we won’t accept the old financial institutions! From now on we are going to put people first!”

One response to “arrests & protests in advance of london g20”