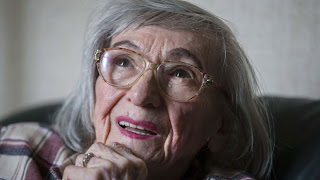 from montrealgazette.com: They were feasts of sublime asparagus — laced with fear. And for more than half a century, Margot Woelk kept her secret hidden from the world, even from her husband. Then, a few months after her 95th birthday, she revealed the truth about her wartime role: Adolf Hitler's food taster.

Woelk, then in her mid-twenties, spent two and a half years as one of 15 young women who sampled Hitler's food to make sure it wasn't poisoned before it was served to the Nazi leader in his "Wolf's Lair," the heavily guarded command centre in what is now Poland, where he spent much of his time in the final years of World War II.

"He was a vegetarian. He never ate any meat during the entire time I was there," Woelk said of the Nazi leader. "And Hitler was so paranoid that the British would poison him — that's why he had 15 girls taste the food before he ate it himself."

With many Germans contending with food shortages and a bland diet as the war dragged on, sampling Hitler's food had its advantages.

"The food was delicious, only the best vegetables, asparagus, bell peppers, everything you can imagine. And always with a side of rice or pasta," she recalled. "But this constant fear — we knew of all those poisoning rumours and could never enjoy the food. Every day we feared it was going to be our last meal."