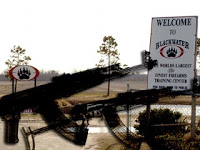 from usa today: Federal agents raided a Blackwater armory Tuesday and seized 34 automatic rifles that the company purchased and stored on behalf of a local law enforcement agency, the Associated Press reports. Anne Tyrrell, a Blackwater spokeswoman, tells AP that ATF agents searched the Moyock, N.C., facility. The raid came after reports on a deal in which the company paid for weapons that were registered in the name of the Camden County, N.C., Sheriff's Office.

"The 2005 agreements gives the sheriff's office unlimited access to the weapons, including 17 Romanian AK-47s and 17 Bushmasters," the wire service says. "But [Sheriff Tony] Perry said his department has only used the AK-47s in shooting practice at Blackwater and that none of his 19 deputies are qualified to use them." Federal law prohibits private companies or individuals from purchasing automatic weapons.