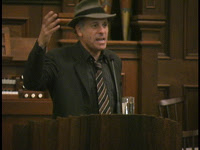 from portland indymedia:
Greg Palast, investigative reporter visited Portland Wednesday evening, April 24, 2007, promoting the addition of two chapters to his most recent book, "Armed Madhouse." The event was co-sponsored by KBOO, and was a benefit for the Portland Alliance.

Palast was in town last year on his Armed Madhouse Tour, and this visit presented some of the same information. Though he did review much of the earlier material, the additional two chapters added much that was new, especially his investigation of the Federal Debacle in New Orleans leading up to and after Hurricane Katrina.

The event was extremely well attended, filling up the majority of the seats at the First Unitarian Church, probably about 300-350 people.

Greg began his one hour presentation with some of material from his last visit to Portland, his Armed Madhouse Tour. Since some of this is already familiar to those who have read his book, attended his lectures or seen the video on Public Access television or on the internet, I've broken the audio files up into three sections...

The first section goes over much of his earlier material and is about 20 minutes in length. He reiterates much of the statistics from his most recent book, "Armed Madhouse," concerning the 2000 and 2004 elections., where millions of votes were not counted. According to Palast, over three million votes were thrown out and in various parts of the country the chances of your vote not being counted increased according to the color of your skin.
Greg Palast, Part One, MP3

The second section, about 16 minutes, is about David Iglesias, the U.S. Attorney from New Mexico who was one of many U.S. Attorneys fired by the Justice Department for apparently political reasons.
Greg Palast, Part Two, MP3

The third segment is about 24 minutes in length and addresses the Bush administration debacle in New Orleans. Palast demonstrates, with documentation, how the problems which plagued New Orleans after Katrina made landfall were due to mismanagement and cronyism going back many years.
Greg Palast, Part Three, MP3

a big thanks to jim lockhart & philosopher seed