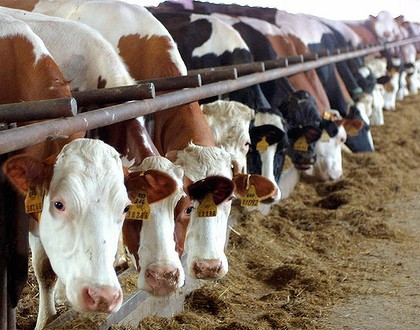 from theage.com.au: A plan to feed Australian dairy cows genetically modified rye grass
designed to boost milk production has sparked concerns from both organic
and non-organic farmers. Opponents of the scheme fear that GM grasses could
contaminate neighbouring properties and that existing labelling
requirements would not allow consumers to identify products made from
cows fed on the modified rye. Greg Paynter, of the Organic Federation of Australia, said the role of GM grasses in the food chain was "a sleeping giant". We’ll have humans consuming milk from cows that have been
consuming genetically modified material. We just don’t know what effects
we might have to deal with in the future. They’re talking about scientific testing but the natural processes and ecosystems have been tested over 3 billion years."

Ben Copeman, general manager of the National Association for
Sustainable Agriculture Australia,  said while organic producers had
to follow strict labelling requirements, the same rules did not apply
to products with GM crops in their food chain, potentially
leaving consumers unaware. Mr Copeman also said many of Australia’s
important grain customers, such as Japan, China and Korea, did not want
GM in their food chains and had zero tolerance to GM contamination.