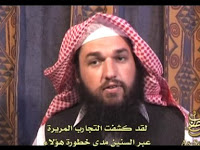 azzam the operative has a new video

from ap: An American member of al-Qaida threatened foreign diplomats and embassies across the Islamic world in a new video Sunday, saying they would targeted as "spy dens."

The 1 hour, 17 minute video also featured a computer-animated recreation of a March 2006 suicide attack that killed U.S. diplomat David Foy in Karachi, Pakistan, and testimony from a man who claimed to be the bomber.

"We shall continue to target you, at home and abroad, just as you target us, at home and abroad, and these spy dens and military command and control centers from which you plotted your aggression against Afghanistan and Iraq," said Adam Gadahn, a Californian also known as Azzan al-Amriki.