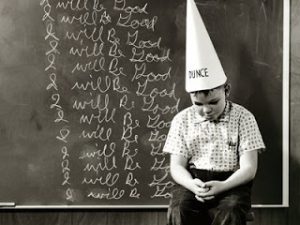 from grist: A new study says 3-year-olds who mostly eat processed foods have lower IQs five years later. (So Pop-Tarts and Sunny-D are why we’re “falling behind” China in math and science?) The study, cited in The Guardian, examined the diets of 14,000 wee Britlets, based on what their parents reported feeding them.

Three is the magic number: Your brain grows the fastest from birth to age 3, says The Guardian, and what kids eat at 3 affects intelligence later – even if the kid’s diet improves afterwards.

Dumb and dumber: “Every one-point increase in the study’s dietary pattern score – a record of processed fat intake – was associated with a 1.67-point fall in IQ,” the post says.

So veggies are good? The Guardian adds this no-duh note: “Food packed with vitamins and nutrients notably helped boost mental performance as youngsters got older, the Journal of Epidemiology and Community Health reports.”