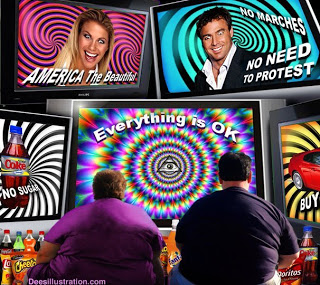 from the week: First there was product placement. Now there's "behavior placement", the planting of subtle messages in popular TV shows to encourage certain viewer behavior — such as healthy eating or eco-conscious habits — and thereby convince sponsors that their brands will be associated with "feel-good, socially aware" shows. NBC has owned up to the practice, reports The Wall Street Journal, as part of its Green Initiative: If "Tina Fey is tossing a plastic bottle into the recycling bin," the theory goes, audience members will be more apt to do the same. Innocuous or "Orwellian"?

This isn't just creepy, it's dumb: The pressure to be eco-conscious has reached a new high, says says Christopher Rosen in Movieline. NBC implies that people are too dumb to make healthy decisions on their own. How "patently stupid." Do viewers really need NBC "telling them how to run their life?"

What's the big deal? Despite the hubbub, the principles NBC promotes are "fairly innocuous," says Amy Chozick in the Wall Street Journal. "Climate change may be controversial," but these shows don't make a political statement — they simply show characters making green-conscious decisions. "Most people can agree... [this] is a good thing."

Unfortunately, healthy habits aren't the bottom line: Clearly, for NBC, behavior placement is about dollar signs and cynicism, says Jon Bershad in Mediaite. The execs' attempts to manipulate their viewers to draw eco-conscious, health-conscious advertisers is "soul-crushing" proof that "everything is a business" these days.