from epoch times: The Opening of the Beijing Olympics will occur in about 40 days. The Chinese Communist regime has deployed surface-to-air missiles in Beijing City to prevent an airborne terrorist attack on the Olympics. According to a June 22 report from Hong Kong's Sing Tao Daily, Beijing's surface-to-air missiles were deployed only 300 meters across from the Olympic Sports Center. The venue is under military administration, surrounded by fences. 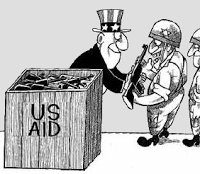 from afp: The US Congress has approved a 170 million dollar increase in security assistance to Israel as part of its new 10-year, 30 billion dollar defense aid commitment to the Jewish state. The money for Israel was part of a larger supplemental spending bill that included 162 billion dollars for the wars in Iraq and Afghanistan. The legislation gained final approval in a 92-6 Senate vote late Thursday.

mexicans urged to reclaim a piece of texas

from telegraph: Mexicans are being encouraged to reclaim a piece of Texas, more than 150 years after they lost the Lone Star state to the United States... Thanks to a rising Mexican peso and an economy which is growing faster than that of the US, a country that has previously been looked on by America as a source of cheap labour is now seen as a potential source of rich investors. A "Texas for Sale" sign and cowgirl-clad models greeted visitors to a recent property fair in Monterrey, Mexico, at which hundreds of Mexicans looked over lists of potential investment opportunities.

from danger room: Governments love top-secret facilities, and Australia, it seems, is no exception. Australian media is reporting that the government there has built a classified facility designed to house top leaders in the event of a terrorist attack. "Protected by heavy gates, a high-security fence and an array of CCTV cameras, the Symonston facility is discreetly located at 24 Wormald Street next to the Canberra office of the Aristocrat gaming machine company," The Canberra Times reports. "The precise purpose of the new installation is classified."