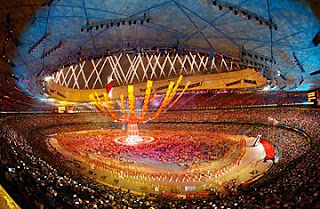 from mcclatchy: The most expensive and lavish Olympic Games in history came to a close Sunday as Beijing officially passed the Olympic flame to London, and the countdown started for 2012 games that the British say will be frugal but fun. To the deafening roar of fireworks, Beijing marked the end of Summer Games that brought it a record bounty of 51 gold medals and seized global sports supremacy from the United States.

A little more than an hour into the ceremony, Beijing Mayor Guo Jinlong handed the Olympic flag to International Olympic Committee chief Jacques Rogge, who immediately passed it on to Boris Johnson, London’s beaming mop-haired mayor.

Then it was London's turn.

As British Prime Minister Gordon Brown watched from the stadium gallery, British designers took over a portion of the evening ceremony, and brought with them a legendary figure in rock music history, a sporting icon and some wry British humor.

A red double-decker London bus drove into the Bird's Nest Stadium, peeling open like a blossoming flower to reveal a stage. On it was Jimmy Page, the Led Zeppelin guitarist, playing the classic "Whole Lotta Love." Moments later, David Beckham, the soccer icon, arrived to kick a soccer ball into a crowd of athletes. Beckham scored a huge ovation.

Tens of thousands of Britons watched the ceremony in live broadcasts on 30 giant screens around the British Isles, including in London's Trafalgar Square.

(sorry, this was all just too ridiculous not to post... 2012, jimmy page, the masses watching telescreens... how could i not?)