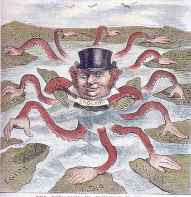 from village voice: Attention, planet Earth: Your future is being decided today at the annual Bilderberg Group conference. This year's five-star resort site is the Klassis Hotel in Silivri, Turkey, 40 miles from Istanbul.
[ed: this is disinfo, because bilderberg expert jim tucker says it's at the ritz-carlton in istanbul.]

Conspiracy theorists have long thought that the Bilderbergers were a shadowy cabal of pols and industrialists trying to rule the planet and even establish a New World Order.

And some of the attendees would smugly agree with that assessment. That's what Brit author Jon Ronson says in a fascinating CNN Europe report from a couple of years ago that you can view here.

Among this year's attendees at the extremely private (nay, secretive) meetings, according to the Turkish paper Today's Zaman, will be ousted World Bank prexy Paul Wolfowitz, along with the usual cast of characters led by Henry Kissinger.

Let's hope the self-anointed world leaders who are gathering there will shoot some good golf scores. Otherwise, they might take out their frustrations on the rest of us.

Back in the '90s, when the militia movement was gathering steam in the US, those right-wing extremists often focused on the Bilderbergers as proof of a coming New World Order. They were kinda correct.

Fortunately, however, with attendees like Wolfowitz (and such weak goniffs as New York governor George Pataki, who went last year), I wouldn't put too much stock in their plans. Wolfie, as it was noted earlier by the Washington Post during his final daze at the World Bank, was such a poor administrator at the Pentagon and bank that he couldn't organize a two-car funeral.

from dallas morning news: Gov. Rick Perry is flying to Istanbul, Turkey, today to speak at the super-secret Bilderberg Conference, a meeting of about 130 international leaders in business, media and politics.

The invitation-only conference was started in 1954 and named for the Dutch hotel where the conference was first held. Those who attend promise not to reveal what was discussed, security is tight, and the press and public are barred...