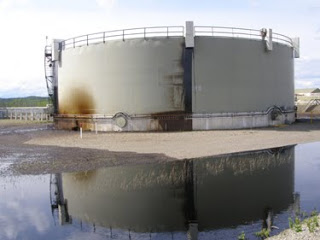 from reuters: The Trans-Alaska Pipeline, partly owned by BP, shut down on Tuesday after spilling several thousand barrels of crude oil into backup containers, drastically cutting supply down the main artery between refineries and Alaska's oilfields. The accident comes at a difficult time for BP - the largest single owner of the pipeline operator, holding 47% - as it struggles to plug a gushing Gulf of Mexico oil well. The shutdown followed a series of mishaps that resulted from a scheduled fire-command system test at Pump Station 9, about 100 miles south of Fairbanks, said Alyeska Pipeline Service Co, the operator of the 800-mile oil line.