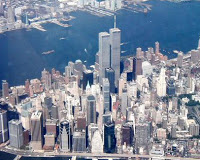 from clyde wilson: Our late friend Murray Rothbard used to point out to those who scoffed at "conspiracy theories" that history is indeed full of real conspiracies, and that often conspiracy provides a more satisfactory explanation for an event than the "lone nut theory" that is popular with government spokespersons.

The continuing drumbeat of speculation that 9/11 may have been a U.S. government "black ops" mission, a charge coming from what seems to be a respectable minority of seemingly informed observers, tells us much about the sad condition of the American polity.

I am inclined to think that none of us can possibly have enough information to know the full truth about 9/11. We will not have such information for years, very possibly never. Why, we still don’t know the full truth about the Lincoln and Kennedy assassinations. In my always humble opinion, the incompetence demonstrated by our rulers before, during, and after 9/11 would be alone enough to bring down any government, without the need for revelations of complicity – if we had a responsible democratic regime.