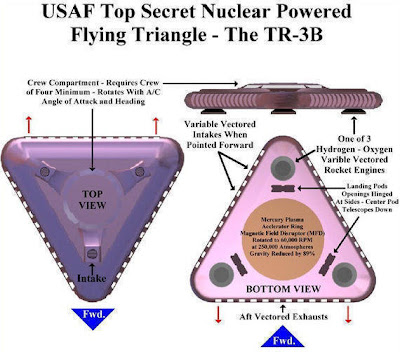 Top Secret TR-3B remains only a rumored craft, a product of an off-the-books black project called Aurora. Edgar Fouche, a former Area 51 worker, came forward in the nineties to reveal much of what is known in his book, "Alien Rapture - The Chosen," co-written by Brad Steiger. A description of the craft's capability clearly resembles the Nazi Bell. "The TR-3B has a circular, plasma filled accelerator ring called the Magnetic Field Disrupter. The mercury based plasma is pressurized at 250,000 atmospheres at a temperature of 150 degrees Kelvin, and accelerated to 50,000 rpm to create a super-conductive plasma with the resulting gravity disruption."

An article at Rense.com explains further the accelerator's value, "...mass of the circular accelerator, and all mass within the accelerator, such as the crew capsule and the nuclear reactor, are reduced by almost 90%. This causes the effect of making a vehicle extremely light and able to outperform and outmaneuver any craft yet constructed--except, of course, those UFOs we did not build. The TR-3 is a reconnaissance platform with an indefinite loiter time. "Indefinite" because it uses a nuclear reactor for power." The actual propulsion is provided by three multimode thrusters mounted at each bottom corner of the triangular platform. If you need more information there is TR-3B.com.

Is the TR-3B Astra real? You can listen to a Coast to Coast interview of a close encounter with a TR-3B. There's been many sightings of black trangles. Some contend the TR-3B has been retired? Is it buried at Groom Lake?

Edgar Fouche left black ops work to market a behavior modification software package, called Neurosync MIME! It's a chilling thought, people buying subliminal messages that may control more than just how much they smoke or eat? Will it feel strange--or just confusing--to be happy when your rational mind says otherwise? Will you just shrug your shoulders after a brief pause to continue your day? The controllers couldn't be so obvious--could they?