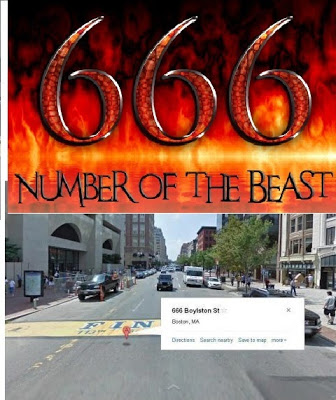 Does formal address of Boston Marathon finish line, 666 Boyleston St, represent an occult signature?  The power of symbolism remains unappreciated in America.  Symbols used as occult signatures in public events can be employed to powerful effect.  A prior post on James Shelby Downard, “King Kill 33: Masonic Sorcery Behind Kennedy Assassination,” illustrates point: “…the ultimate purpose of that assassination was not political or economic but sorcerous; for the control of the dreaming mind and the marshaling of its forces is the omnipotent force in this entire scenario of lies, cruelty and degradation. Something died in the American people on November 22, 1963 — call it idealism, innocence or the quest for moral excellence — it is this transformation of human beings which is the authentic reason and motive for the Kennedy murder….”  Downard’s interpretation of Kennedy assassination, its impact on people, entertains possibility it represents a powerful force or sorcerer’s “spell.”  April represents an active month on occult calendar. The present writer could no longer ignore recurrence of April dates and began taking note, see post “Blood Sacrifice to the Fire God!” You have to decide for yourself, whether 666 Boyleston means something or just pure coincidence?