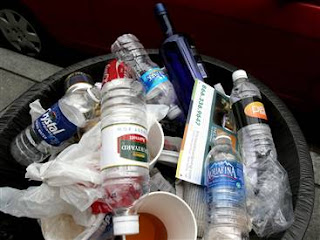 from allgov: Whether it’s because of the economy or pressure from environmentalists, bottled water sales are declining after years of growth. Sales dropped 3.2% in 2008 and are expected to fall another 2% this year. Industry leaders are insisting the decline is temporary, and that sales will rebound once consumers begin to enjoy better times. But environmental groups are claiming credit for their tireless campaigns to show the harm plastic water bottles cause. In addition to filling up landfills, the bottles’ manufacturing requires more than 17 million barrels of oil each year.

Whatever the cause of falling sales, consumers instead are turning more to tap water—and often at a risk to their health. An investigation by The New York Times found that of the 60,000 chemicals used in the United States, only 91 of them are regulated by the Safe Drinking Water Act. Furthermore, it was discovered that “more than 62 million Americans have been exposed since 2004 to drinking water that did not meet at least one commonly used government health guideline intended to help protect people from cancer or serious disease,” according to the Times.

According to statistics compiled by the Environmental Working Group, the cities with the worst tap water are Pensacola, Florida; Riverside, California; and Las Vegas. The best water from public utilities can be found in Arlington, Texas; Providence, Rhode Island; and Fort Worth, Texas.