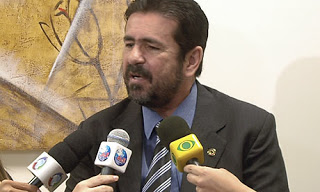 from guardian: A Brazilian politician who fronts a popular television crime show is being investigated for allegedly ordering a series of executions in a bid to boost his ratings. Wallace Souza, a former police officer who used his lunchtime television slot to rail against the violence sweeping the jungle city of Manaus, is suspected of commissioning at least five murders to prove his claim that the region is awash with violent crime. "Manaus can no longer live with this wave of crime," Souza, 50, frequently told the audience of his daily show Canal Livre. "Nowadays everyone is killing." In a 2008 speech at Manaus's local parliament, Souza boasted that Canal Livre enjoyed complete editorial freedom and was conducted with "journalistic responsibility". But prosecutors in the remote Amazon city say the politician's actions went far beyond the call of journalistic duty, accusing Souza of links to drug trafficking, death squads and organised crime, and possessing illegal arms.

evangelical leader, 9 others charged in brazil
from cbsnews: The founder of one of Brazil's biggest evangelical churches siphoned off billions of dollars in donations from his mostly poor followers to buy jewelry, TV stations and other businesses for himself, authorities charged Tuesday. A Brazilian judge accepted charges from prosecutors alleging that Bishop Edir Macedo and nine other people linked to the Universal Church of the Kingdom of God committed fraud against the church itself and against its numerous followers. Sao Paulo state's prosecutors office alleged in a statement that Macedo and the others took more than $2 billion in donations from 2003 to 2008 alone, but charged that the alleged scheme went back 10 years. Church lawyer Arthur Lavigne told the newspaper Folha de S. Paulo that the accused denied any wrongdoing. Church officials did not respond to attempts to reach them by phone and e-mail.