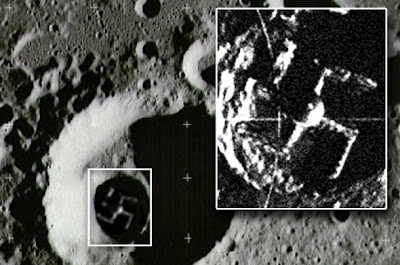 Does image (left) of a Nazi moon base from Iron Sky movie reflect only fantasy or is there more to it?  Operation High Jump, Nazi Saucers and the Bell project provide hints of more!  Ground Zero looks to the sky with multiple UFO sightings recently in California all headed in direction of Edwards AFB:   "...Clyde Lewis welcomes Olav Phillips and Rob Daven back to the show to discuss their research into a secret space program allegedly known as ‘Solar Warden‘. Is there really an ‘Alternative 3‘-like scenario? Were ‘Strange Aircraft Sighted In The Skies Over California‘? Is this the weaponization of space disguised as climate control? Don’t lose your seat on the spaceflight to ‘Solar Warden: Revealing A Secret Space Agenda‘!" The 1960 Black Knight satellite sighting discussed as well. Conspiracy HQ website posts several recent articles covering subjects in addition to Solar Warden discussed on jam-packed January 9th episode of Ground Zero Live.  It's a can't miss Ground Zero Live episode!