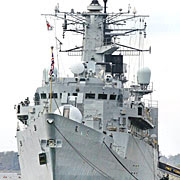 from sky news: The Government is demanding the “immediate and safe return” of 15 British sailors and Marines seized at gunpoint by Iranian forces.

They were taking part in a routine operation boarding merchant ships in Iraqi territorial waters when they were taken captive by Iranian naval vessels.

The sailors and Marines had completed a successful inspection of one ship, reportedly a dhow, when the group and their two boats were surrounded.

They were then escorted by Iranian vessels into its territorial waters.

The men, from the Type 22 frigate HMS Cornwall, were seized in the Shatt Al Arab waterway.

The Royal Navy insists they were operating in Iraqi waters and not Iranian territory.

One response to “british forces held by iran”