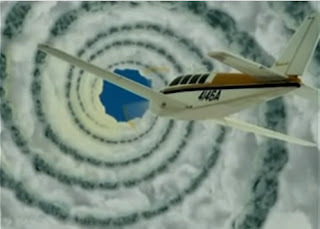 Bruce Gernon Jr., a young pilot at the time,  Dec. 4 , 1970 on a familiar route from Andros Island, Bahamas to South Florida, had an unexplainable short trip that would lead to decades of searching to understand!

"It was shortly after takeoff when I noticed an elliptical cloud directly in front of us about a mile away, hovering only about 500 feet above the ocean. It was a typical lenticular cloud, but I had never seen one that low...the lenticular cloud quickly changed into a huge cumulus cloud. We were climbing at 1,000 feet per minute, and the cloud seemed to be building up at the same rate. Unexpectedly, it caught up and engulfed the Bonanza [Beechcraft airplane]. After 10 minutes of climbing in and out of this cloud, the airplane finally broke free at 11,500 feet and the sky was clear.
I leveled the Bonanza off and accelerated to its maximum safe cruising speed of 195 miles per hour. When I looked back at the cloud...It now looked like an immense squall, abnormally shaped in the form of a giant semicircle extending around us..."

"Soon we noticed another cloud building directly in front of us, near the Bimini Islands. It looked a great deal like the cloud that we had just left...Upon entering the cloud we witnessed an uncanny spectacle. It became dark and black, without rain, and visibility was about four or five miles. There were no lightning bolts, only extraordinarily bright white flashes that would illuminate the entire surrounding area. The deeper we penetrated, the more intense the flashes became, so we made a 135-degree turn to the left and headed due south out of the cloud."

"...it became apparent that the cloud near Andros and the cloud near Bimini were actually opposite sides of the same ring-shaped body...This seemed impossible, but there was no other explanation...
...later, I noticed a large U-shaped opening on the west side of the doughnut cloud. I had no choice but to turn and try to exit through the opening. As we approached, we watched the top ends of the U-gap join, forming a hole. The break in the cloud now formed a perfect horizontal tunnel, one mile wide and more than 10 miles long. We could see the clear blue sky on the other side.
We also saw that the tunnel was rapidly shrinking. I increased the engine RPM, bringing our speed to the caution area of 230 miles per hour. When we entered the tunnel, its diameter had narrowed to only 200 feet....It appeared to be only a mile long instead of ten-plus as I had originally estimated. Light from the afternoon sun shone through the exit hole and made the silky white walls glow. The walls were perfectly round and slowly constricting. All around the edges were small puffs of clouds of a contrasting gray, swirling counterclockwise around the airplane.
We were in the tunnel for only 20 seconds before we emerged from the other end. For about five seconds I had the strange feeling of weightlessness and an increased forward momentum. When I looked back, I gasped to see the tunnel walls collapse and form a slit that slowly rotated clockwise..."

"Something bizarre had happened. Instead of the blue sky we expected, everything was a dull, grayish white haze. Visibility seemed like more than two miles, yet we could not see the ocean, the horizon, or the sky. The air was very stable and there was no lightning or rain. I like to refer to this as an “electronic fog;” because it seemed to be what was interfering with our instruments...
We were in the electronic fog for three minutes when the controller radioed that he had identified an airplane directly over Miami Beach, flying due west... We could not yet have reached Miami Beach— we should have been approaching the Bimini Islands...
Suddenly the fog started breaking apart, in a weird sort of electronic fashion. Long horizontal lines appeared in the fog on either side of us. The lines widened into slits about four or five miles long. We saw blue sky through them. The slits continued expanding and joined together. Within eight seconds, all the slits had joined, and the gray fog had disappeared. All I could see was brilliant blue sky as my pupils adjusted to the abrupt increase in brightness. Then, I saw the barrier island of Miami Beach directly below."

"After we landed at Palm Beach I realized that the flight had taken a little less than 47 minutes...I had never made it from Andros to Palm Beach in less than 75 minutes, even on a direct route. Our course on this flight was quite indirect and probably covered close to 250 miles. How could the airplane travel 250 miles in 47 minutes? We taxied to customs, ending the fortuitous flight. We didn't talk about it for a long time."

Gernon has come up with an explanation, shared in a 2005 book "The Fog." BermudaTriangleFog.com contends, "Gernon is the only one to see this from its birth stage through its mature stage and enter the heart of the Timestorm and escape through a Tunnel Vortex and experience a time warp of 30 minutes forward in time and 100 miles forward in space."  A Powerpoint presentation is available at the website.

There's even an attempt at a scientific explanation available, "The Science Behind Bruce Gernon’s Flight 4 December 1970." It's an interesting read, and afterwards, the Bermuda Triangle may seem a little less mysterious?  A 2006 interview of Gernon and co-author Rob MacGregor is available here.  Also, an excerpt from a documentary about the 1970 flight follows below. Is the Bermuda Triangle, an area with less magnetic resistance to outside forces such as the solar wind or solar flares?  Do these outside intrusions lead to unusual electrical storms such as Gernon's electronic fog?