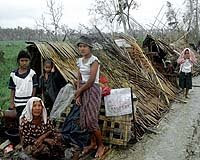 from afp: The death toll from Myanmar's devastating Cyclone Nargis has risen to 34,273, with 27,836 people missing, state radio said Tuesday. "According to to the latest information at 6pm today, 34,273 were killed, 1,403 were injured and 27,836 missing," it said in a report... However, the UN has warned that the toll likely exceeds 100,000, and that many more may die unless vital aid reaches some 1.5 million survivors. 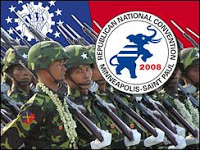 from washington times: The man picked by the John McCain campaign to run the 2008 Republican National Convention resigned Saturday after a report that his lobbying firm used to represent the military regime in Myanmar. Doug Goodyear resigned as convention coordinator and issued a two sentence statement:

"Today I offered the convention my resignation so as not to become a distraction in this campaign. I continue to strongly support John McCain for president, and wish him the best of luck in this campaign."