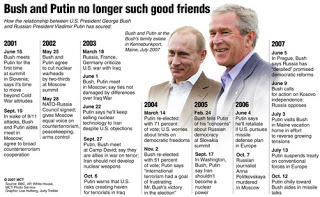 from mcclatchy: The Bush administration’s failure to win Russia’s consent to install U.S. missile defenses in its European backyard and a growing list of other disputes suggest that President Bush and his aides have misread the man whose “soul” Bush thought he’d divined when they first met six years ago.

Bush’s strategy on Russia assumed that Russian President Vladimir Putin embraced democracy, wanted integration with the West and sought a “strategic partnership” in which Moscow would acquiesce to U.S. policies such as NATO expansion. Feuds could be resolved through the close personal relationship that Bush believed he had with his Russian counterpart.

Instead, fueled by record oil and natural gas prices and resentment of what he lambasted in February as Bush’s “almost uncontained hyper use of force,” Putin has led global opposition to the U.S. war in Iraq, hosted Palestinians on the U.S. list of terrorist groups, sold anti-aircraft missiles and other arms to Iran and stymied Bush’s drive to tighten U.N. sanctions on the Islamic republic for refusing to suspend uranium enrichment.