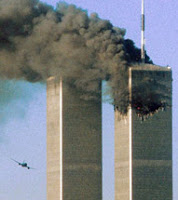 from raw story: Senior Bush administration officials sternly cautioned the 9/11 Commission against probing too deeply into the terrorist attacks of September 11, 2001, according to a document recently obtained by the ACLU.

In the message, the officials denied the bipartisan commission's request to question terrorist detainees, informing its two senior-most members that doing so would "cross" a "line" and obstruct the administration's ability to protect the nation.

"In response to the Commission's expansive requests for access to secrets, the executive branch has provided such access in full cooperation," the letter read. "There is, however, a line that the Commission should not cross - the line separating the Commission's proper inquiry into the September 11, 2001 attacks from interference with the Government's ability to safeguard the national security, including protection of Americans from future terrorist attacks." ...

The letter can be found on page 26 of the ACLU's set of unveiled documents.

9/11 updates:
Washington Post publishes Yukihisa Fujita's rebuttal letter*
Rahm Emanuel helped GOP sink 9/11 trial*
Summer 2001: FAA participates in exercise based around hijacking of Boeing 767*
They could have stopped 9/11: Coleen Rowley on the Moussaoui case
Audio: Coleen Rowley on Antiwar Radio*
Holder: Osama never to be caught alive*
April Gallop's case on 9/11-pentagon thrown out*
The 9/11 cat's out of the bag*
Full El Al flight took off on 9/11 from JFK to Tel Aviv?*
War games, Blackwater, KSM - updates to the 9/11 timeline as of mar16*