from examiner: President Bush is quietly providing back-channel advice to Hillary Rodham Clinton, urging her to modulate her rhetoric so she can effectively prosecute the war in Iraq if elected president.

In an interview for the new book “The Evangelical President,” White House Chief of Staff Josh Bolten said Bush has “been urging candidates: ‘Don’t get yourself too locked in where you stand right now. If you end up sitting where I sit, things could change dramatically.’ ” 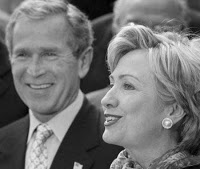 from what really happened: These gestures sound very conciliatory, but mask the real reason that Bush appears to be helping Clinton: it’s to insure the continuation of the massive cover ups that run from Iran-Contra to Mena, from Eugene Hasenfus to the “neutralization” of Vince Foster to 9/11.

Just as in 1993 when Bill Clinton – from literally out of nowhere – received the Democratic party’s nomination (courtesy of some interesting moves by Bush Sr.), Bush Jr. has to hand off the presidency to someone who won’t blow the cover on the terrible abuses of power and outright deceptions which have been been perpetrated against the American people under the presidencies of Bush Sr., Clinton, and Bush Jr.