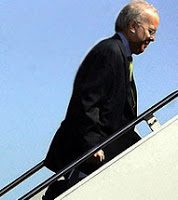 bush’s brain has left the building

from the guardian: Karl Rove, President Bush's close friend and chief political strategist, announced Monday he will leave the White House at the end of August, joining a lengthening line of senior officials heading for the exits in the final 1 years of the administration.

On board with Bush since the beginning of his political career in Texas, Rove was nicknamed "the architect" and "boy genius" by the president for designing the strategy that twice won him the White House. Critics call Rove "Bush's brain."

"We've been friends for a long time and we're still going to be friends," Bush said, standing with Rove on the South Lawn. "I would call Karl Rove a dear friend. I thank my friend," Bush said, noting that his own term is running down. "I'll be on the road behind you in a bit."

Rove said his service had been "the joy and honor of a lifetime."