calderon sworn in amid chair-tossing 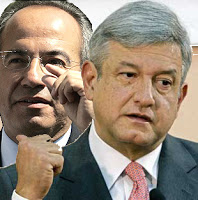 from taipei times: President Felipe Calderon laid out plans to fight crime and keep Mexicans from migrating abroad for work, after taking the oath of office amid catcalls and jeers that reflected deep divisions over his narrow electoral victory.

In an apparent reference to the brawls and chair-tossing on the floor of Congress – where leftist lawmakers tried, but failed, to block his inauguration on Friday – Calderon said, “I am aware of the seriousness of our differences, and I fully assume my responsibility to resolve them and reunify Mexico.”

That may be a tall order: His former rival, leftist Andres Manuel Lopez Obrador, egged on protests by demonstrators and lawmakers throughout the day.

Tackling Mexico’s challenges may be equally tough and Calderon acknowledged that the country is wracked by violent crime, killings and kidnappings that are often driven by battles between rival drug gangs.

“Today, crime is trying to terrify and immobilize the public and the government,” Calderon told a friendlier crowd in a speech before invited guests at a Mexico City concert hall. “The lack of public safety threatens everybody and has become the main problem of whole states, cities and regions.”

A lawyer by training, Calderon said he would come up with a plan within 90 days to improve law enforcement, though he stopped short of promising simple solutions.

“It won’t be easy or quick, it will take time and a lot of money and even, unfortunately, lives,” he said. “But rest assured: This is a battle that I will lead.”

He added that next week he will announce cuts to the presidential salary and those of top officials, and repeated his campaign pledge to create jobs to stem outward migration.

“Instead of workers leaving to look for US investment, it would be better for that investment to come to where the workers are, so that our families and communities are no longer divided,” he said.

The 44-year-old career politician said he is prepared to negotiate with the opposition, but warned: “I won’t wait for dialogue before going to work. The people are ready for action.”

Minutes before Calderon’s arrival at Congress for the swearing-in, lawmakers threw chairs and shoved one another to the floor to gain control of the hall, with Lopez Obrador’s supporters trying to block the ceremony.

But visiting foreign dignitaries seemed to take it in stride.

“That seems to me to be to be a natural progression in a democratic society,” Perry said. “People are feeling comfortable about expressing their opinion and what have you, so I was pretty excited about a little fisticuffs, a little protest.”

Later on Friday, Calderon had lunch with Mexican political and business leaders, and met with a group of Central American leaders to discuss development plans, and proposed a regional summit on the issue for next year. Calderon also met with Spanish Prince Felipe of Asturias and British Deputy Prime Minister John Prescott, the government news agency Notimex said.

Fox stood by Calderon’s side at the inaugural ceremony, then took an air force helicopter to his ranch in central Mexico, where he plans to retire. The first opposition president in 71 years, Fox largely disappointed voters who believed his promises of millions of new jobs and prosperity.

Calderon was conciliatory during his speech at the National Auditorium, saying: “To those who voted for others, I will not ignore your causes. I ask you to let me win over your confidence.”