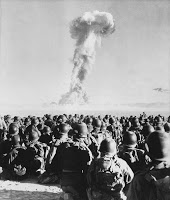 from ap: Hundreds of former Canadian soldiers will receive compensation for being assigned to participate in atomic bomb tests by the U.S. and British militaries in the 1960s, the Defense Ministry said Sept. 2.

Defense Minister Peter MacKay said the soldiers were involved in operations in the United States, Australia and the South Pacific from the end of World War II until the international treaty banning atmospheric test explosions was signed in 1963.

“The participants have received no recognition for their dangerous assignments in the service of Canada,” MacKay during a speech Tuesday in Calgary.

In total, 900 former soldiers or families of deceased veterans will receive payments of $22,000 each, Mackay said.