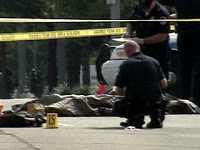 from abc: A man arrested near the U.S. Capitol with a small cache of weapons and explosives in his vehicle is facing charges for carrying a deadly weapon and possessing an unregistered firearm and ammunition, according to U.S. Capitol Police.

The officer noticed a rifle case in the vehicle and proceeded to search it. Police say they found one AK-47 type rifle, two fully loaded magazines, ammunition and what was described as a grenade-type IED. Schneider added that officers found a loaded pistol and at least one knife in the vehicle.

The IED was removed and rendered safe. Authorities transported it to an FBI lab in Quantico, Va., for further analysis.