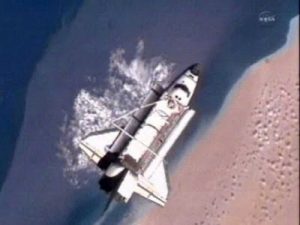 from cnn: At the intersection of science-fiction and science-fact was William Shatner on Monday. As James T. Kirk, the fictional captain of the Starship Enterprise, Shatner voiced the opening credits of the original “Star Trek” TV series and several movies since 1966. The 79-year-old actor reprised his role to wake up the crew of the space shuttle Discovery at 3:23 a.m. ET Monday. “Space, the final frontier. These have been the voyages of the space shuttle Discovery. Her 30-year mission: To seek out new science. To build new outposts. To bring nations together on the final frontier. To boldly go, and do, what no spacecraft has done before,” Shatner said over the “Theme from Star Trek.” This is the spacecraft’s final scheduled mission. It has made 39 flights and 13 journeys to the international space station. Discovery undocked from the space station for the final time at 8:37 a.m., according to NASA, in preparation for its flight home. Discovery is scheduled to land at Florida’s Kennedy Space Center shortly before noon Wednesday – one day later than originally scheduled. The nearly three-decade shuttle program is scheduled to end later this year.