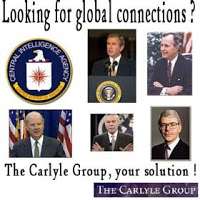 from deseret news: Carlyle Group, the private-equity firm run by David Rubenstein, agreed to acquire Booz Allen Hamilton Inc.'s U.S. government-consulting business for $2.54 billion, its biggest buyout since the credit markets collapsed in July... The Booz Allen government-consulting unit has more than 18,000 employees and annual sales of more than $2.7 billion. Its clients include branches of the U.S. military, the Department of Homeland Security and the World Bank.

4 philly cops to be fired over video beating 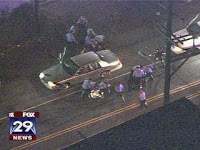 from ap: Philadelphia's police commissioner said Monday that four officers will be fired and four others disciplined for their roles in the beatings of three shooting suspects, an encounter that was captured on videotape and drew widespread outrage... The video, shot by WTXF-TV, shows the suspects being pulled from their car on the side of the road and groups of officers kicking, punching and beating the men. A total of 19 officers — 18 city police and one transit officer — were involved.

from thinkprogress: Last year, former deputy attorney general James Comey revealed that in 2004, he refused to “certify” the legality of certain aspects of the National Security Agency (NSA) spy program... Comey’s testimony implied that “other programs exist for domestic spying” outside of the NSA program. Radar’s Christopher Ketcham suggests that another spy program does exist: “Main Core,” a program that authorizes “computer searches through massive [unspecified] electronic databases” in order to discover “potential threats” in the event of a “national emergency”.

from kurt nimmo: Joe Lieberman, senator and Homeland Security and Governmental Affairs Committee chairman, wants to censor what you watch on Google and YouTube. Lieberman has sent a letter to Eric Schmidt, Google CEO, accusing the corporation of allowing “offensive material” on its site, namely “videos produced by al-Qaeda and other Islamist terrorist groups.” Joe wants these taken down immediately and demands Google “prevent them from reappearing.” No word if Schmidt has responded, but a letter sent by a bigwig commissar such as Lieberman is nothing to take lightly. Schmidt and his corporate lawyers have likely confabbed.

from philadelphia inquirer: A Spanish toll-road operator won the bidding war to operate the Pennsylvania Turnpike, offering $12.8 billion for a 75-year lease, Gov. Rendell said today. The proposal by Abertis Infraestructuras, of Barcelona, must be approved by the Pennsylvania legislature, and legislative leaders in Harrisburg have said the plan faces tough sledding with lawmakers. In making the largest bid ever for the private operation of a U.S. toll road, Abertis partnered with a subsidiary of U.S. investment bank Citigroup, and Spanish investment firm Criteria CaixaCorp. 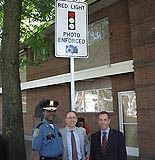 from the newspaper: A city traffic engineer admitted reducing the length of yellow lights at downtown Seattle, Washington intersections by half-a-second. Seattle Traffic Management Director Wayne Wentz told the Seattle Post-Intelligencer newspaper that the reduction was not designed to increase the profit of the city's expanding red light camera program. Instead, the changes made at more than 200 intersections in March were designed to increase traffic flow. "Many of our downtown signals were operating with four seconds of yellow time, then going directly to green for the other direction," Wentz said. "During our recent optimization, we changed the signals to 3.5 seconds of yellow time."
flashback: 6 US cities tamper with traffic cams for $