from op-ed news: It was bad enough when the Carlyle Group bought Dunkin' Donuts last year, forcing millions of conscientious caffeine addicts to look elsewhere for their daily fix. Now, it appears Carlyle has added 1600 Pennsylvania Avenue to its formidable portfolio of acquisitions.

The Carlyle Group achieved national attention in the early days of the Iraq occupation, especially after Michael Moore's "Fahrenheit 9/11" exposed the firm's umbilical ties to the Bush family and the House of Saud. For the uninitiated, Carlyle is a privately-owned equity firm organized and run by former members of the Reagan and Bush Sr. administrations.

Currently, Carlyle manages more than $44 billion in 42 different investment funds, which is an interesting fact in and of itself: Carlyle could lay claim to only a meager $12 billion in funds in December of 2001. Thanks to their ownership of United Defense Industries, a major military contractor that sells a whole galaxy of weapons systems to the Pentagon, Carlyle's profits skyrocketed after the invasion and occupation of Iraq.

Some notable present and former employees of Carlyle include former president George H.W. Bush, who resigned in 2003; James Baker III, Bush Sr.'s secretary of state and king fixer; and George W. Bush, who served on Carlyle's board of directors until his run for the Texas governorship. One notable former client of Carlyle was the Saudi BinLaden Group, which sold its investment back to the firm a month after the September 11 attacks. Until the October 2001 sellout, Osama bin Laden himself had a financial interest in the same firm that employed the two presidents Bush. 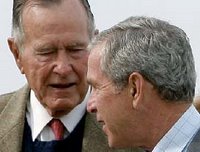 How has Carlyle managed to acquire the White House? The newest edition of Newsweek begins to tell the tale in a story titled "The Rescue Squad": "Bush Senior has been relegated to watching all those political talk shows his son refuses to watch, wincing each time he hears his son's name being mocked or criticized. George H.W. Bush has been, in effect, sidelined by nepotism. He has repeatedly told close friends that he does not believe it is appropriate or wise to second-guess his son, or even offer advice beyond loving support. This time, however, was different. A source who declined to be identified discussing presidential confidences told NEWSWEEK that Bush 41 left 'fingerprints' on the Rumsfeld-Gates decision, though the father's exact role remains shrouded in speculation."