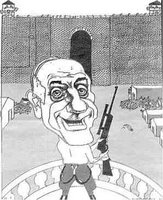 from jerusalem post: Invoking a scene from the film Schindler’s List, one of Norway’s largest newspapers recently published a political cartoon comparing Prime Minster Ehud Olmert to the infamous commander of a Nazi death camp who indiscriminately murdered Jews by firing at them at random from his balcony.

The caricature by political cartoonist Finn Graff appeared on July 10 in the Oslo daily Dagbladet. It has prompted outrage among the country’s small Jewish community and led the Simon Wiesenthal Center to submit a protest to the Norwegian government.

In the cartoon, Olmert is likened to SS Major Amon Goeth, the infamous commandant of the Plaszow death camp outside of Krakow, Poland, who was convicted of mass murder in 1946 and hanged for his crimes.