why do so many bad things keep happening to US? 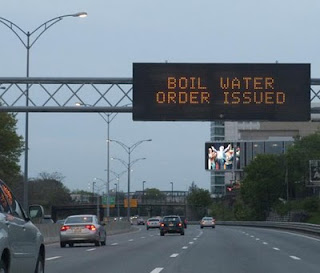 from boston globe: Nearly 2 million residents of Greater Boston lost their supply of clean drinking water when a huge pipe abruptly burst yesterday, prompting authorities to declare a state of emergency and to impose a sweeping order for homeowners and businesses to boil the untreated water now flowing from their taps.

Governor Deval Patrick said residents in Boston and 29 other communities east of Weston should boil water for at least a minute before drinking it to avoid the risk of getting sick. He also asked bottled water companies and the National Guard to help make clean water available to residents in the affected communities.

The crisis began around 10 a.m. yesterday [may1] when a 10-foot-wide pipe in Weston sprang a leak, which worsened throughout the afternoon and eventually cut off Greater Boston from the Quabbin Reservoir, where most of its water supply is stored.