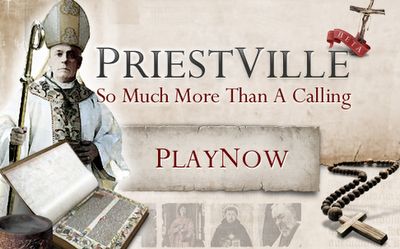 from ncregister: SGR Games, LLC has created 'Vatican Wars' (formerly 'Priestville'), a new online Facebook game. Think of it as 'Mafia Wars' meets the Church. The game divides players into either Templars (socially conservative) or Crusaders (socially liberal), and then allows them to “serve as Catholic priests,” take positions on social issues, and elect a Pope. According to a press release by SGR Games, the test run of the game, involving 30,000 players, had some shocking results. First, the game’s creators were horrified by the lengths some players were willing to go to become Pope. “It was horrifying,” said Cheyenne Ehrlich, founder of SGR Games. “We had three reports of a player being blackmailed into quitting the race for Pope in the game. And the amount of player bullying we saw turned our stomachs. It was so awful that, on several occasions, we considered ending the game.”