cattle cloned from dead animals to produce ‘that memorable taste’ 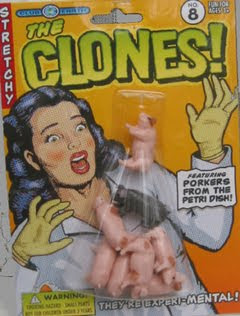 from bbc: Some of the cattle cloned to boost food production in the US have been created from the cells of dead animals, according to a US cloning company. Farmers say it is being done because it is only possible to tell that the animal's meat is of exceptionally high quality by inspecting its carcass.

US scientists are using a variety of techniques to assess which animals have exceptional qualities. These attributes include meat quality, productivity or longevity. These exceptional animals are cloned to be used as breeding stock, with the aim of raising the quality of herds on beef, dairy and pig farms in the US.

There is a long tradition of resurrecting dead animals for cloning - Dolly the sheep being a case in point. The head of the leading US animal cloning company has said that European farmers will fall behind the rest of the world unless they are allowed to use such techniques to improve the productivity of their livestock. The aim of livestock cloning is to clone the best animals to produce the best beef...

But the idea is not to everyone's taste. The leading whole food chain in the US, Whole Foods Market, has banned the sale of products of cloning. According to its global vice-president, Margaret Wittenberg, although meat and milk from cloned animals has been allowed to go on sale in the US, most Americans have never heard of it. "A lot of customers in the United States are oblivious of it," she said. "You don't hear about it in the media. And when you do tell people about it they look at you and say 'you're kidding! They're not doing that are they? Why would they?'"